Taken Wednesday, May 21st, 2014. I wandered around the city checking out a few parking structures that had open rooftops near the train tracks to get a shot of the city and maybe a moving train. The hunt was a little bit of a bust in terms of actual photographic captures, but I think I do have a some ideas for next time.

This shot in particular is from the Steppenwolf theater parking structure, which overlooks the brown/purple line near Halsted St and North Ave. It felt a little creepy taking a photo from there, because the trains slow down around the corner, and at that time of day, it feels like I’m a peeping tom (not that I would know), taking pictures of people through their train windows and invading their privacy (that’s a nice blouse you’re wearing, by the way).

Anyway, I dig that the lampposts kind of frame the photo, and you can see the a bit of the city between the buildings (the Hancock being the easily recognizable one). Could have tried a longer focal length from further back, but not sure I’d have the height to do that.

Photo taken on Friday, May 9th, 2014. This technically falls under Week 11, but I’m willing to fudge this so it gets it’s own week.

Jessica and Justin chose an awesome farm to host their awesome wedding festivities. They were awesome enough to allow me to pull them away for a couple of awesome minutes during the awesome welcome reception to take this awesome photo.

There had been couple of crazy short storms rolling through the area that day, but it made for some really beautiful evening light. I think this could have been even better as a portrait panorama, but didn’t think of it at the time. I might have been a couple beers in. Thanks for an awesome weekend guys! And congrats! (And did I mention how awesome they are?)

Week 11: The Lamppost and the Lighthouse 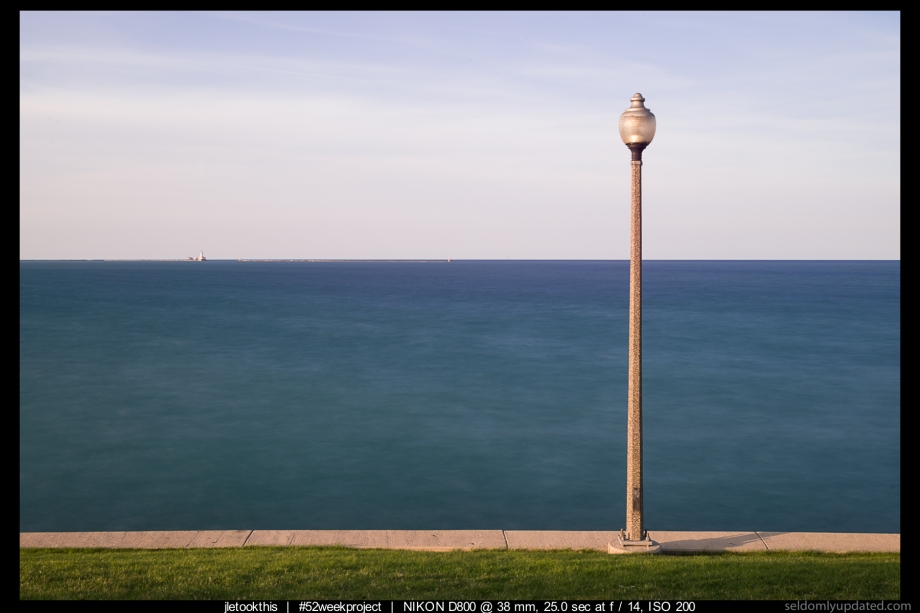 Taken on Tuesday, May 6th, 2014. Took the bus down to Adler Planetarium after work on a day that was windier and colder than it seemed. I was looking for a sunset picture of the skyline, but since I had shown up way before dusk, I decided to try a few different things, which is what this project is all about. The sunset photo was a little pedestrian, so it doesn’t get top billing this week. (Also, full disclosure, it was super windy and cold by the lake, and I was losing feeling in my fingers so I wanted to skedaddle before the sky got interesting enough for a great skyline pic.)

This photo is pretty simple. Make the horizontal things horizontal, the vertical things vertical. Compose the elements in a visually appealing way. Find some balance in the subject. Have an interesting foreground, midground and background. The hard part was composing this with an ND3 filter on it, which only allows 1/1024th of the light through (but it gave me the ability to make this a long exposure).

One of the things I like about this photo is that it has a painting like quality to it with the choppy water smoothed out with the long exposure. It actually has some semblance to my desktop wallpaper that I found that is based on Rene Magritte’s Son of Man painting (that you may recall from the newer-but-not-that-new Thomas Crown Affair movie). Here’s that wallpaper:

Also, here’s the other photo that didn’t make the cut:

The Chicago Skyline at Sunset(ish)

It’s amazing how you can get 2 completely different photos just 30 minutes and 50 yards from each other.