Taken back in October 2015, when I camped near Kalaloch Beach in Olympic National Park in Washington State on my Nikon D700, f/2.8 at 14mm.

There’s a lot of things I love about gifs, but one of the things is that it allows you to capture a passage of time that you just can’t with a static image. This is 5 shots, each 20 seconds, of the Milky Way as it moves through the sky over the pacific ocean, over about a period of 2 minutes.

I don’t know if I can say enough about the night sky. People often ask whether or not it actually looked like this. And it’s hard to say “well, not quite”. Sure with it being a long exposure, it captures the milky way a little more brilliantly than may be seen with the naked eye, but that doesn’t necessarily mean that it’s not actually the way it looks. There is so much of this scene that can’t be captured by just our eyes, or even captured by a photo.

Sometimes we just assume that only the things the rods and cones can detect are what is real, but there are parts of the spectrum that aren’t visible to us but are there nonetheless.

Anyway, I’m not sure what I’m trying to say here, except, yes, these photos are real, and they’re spectacular.

Just steps from my campsite at Ohanapecosh Campground in Mt. Rainier National Park, you can find the Ohanapecosh river.

Taken at dusk, back in October of 2015, using a polarizing filer. Really makes a difference to cut some reflections in the water to get that clarity for long exposure shots. Just thinking about it, and looking at this photo makes me want to get back out into the wilderness, and hear the soothing sounds of running water.

As a bonus, here’s a short timelapse of me setting up camp:

Where was one of your favorite places you’ve camped?

Hi all, thanks for waiting patiently by your computer, tablets or mobile devices for me to update my blog. I promise I am going to do right by you, and I will start posting more. And doing so regularly. (My doctor says that being regular is good.) Sometimes I feel like the words I write are just filler, but I like to think of it as fiber, which will help you digest each of the photos I post.

Just about all the photos I post are in JPEG format. It’s a lossy compressed image format, and is short for Joint Photographic Experts Group, who set the standard for this format first in 1992. In all that time, the format and compression have improved, but sometimes, when I want to share a photo, a JPEG just isn’t gonna cut it. It’s just lacking something. Sometimes, you don’t want a still photo to be so… still. Here enters the GIF.

GIFs have been around since the mid-80’s, and they haven’t always been very good quality, but it’s beautiful what you can do with them these days. I took two photos, and aligned them in photoshop to make this lil animation. One is a nice silhouette (a word which I still need to use spell checker for) of the hillside and an awesome road sign, while the other image captures the glow from a car passing by on the road above.

This is Cape Perpetua in Oregon. From my roadtrip in October. Oregon has so many beautiful oceanside campsites, it’s unfair. The reason I love these oceanside campsites are because 1) you can hear the waves as you drift off to sleep in your tent, b) you have an unobstructed view of the sunset and the milky way (when the weather is cooperative) and 3) you’re usually far away from light pollution.

Alright, thus ends this post. So, hopefully it’s not too long before my next post, but I appreciate you all waiting anyway! 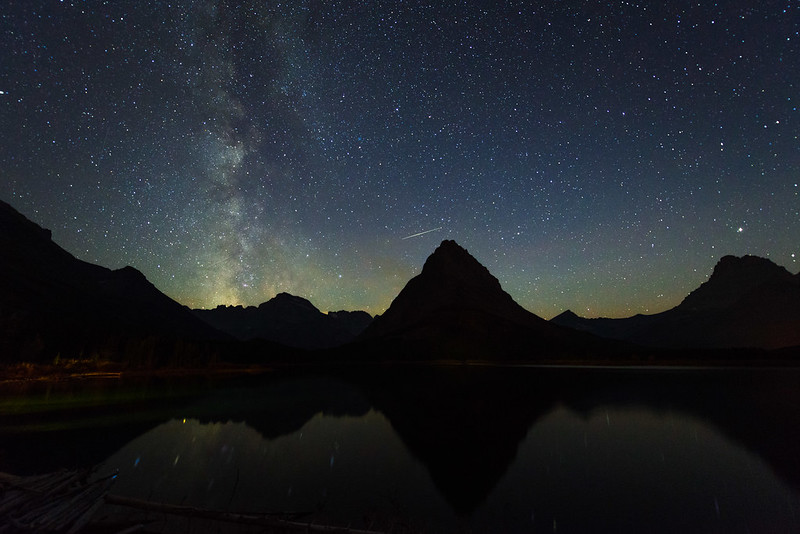 Took this photo a month ago while camping in Glacier National Park. This is a still from a timelapse sequence I was shooting. I’ll be posting that video soon enough! In any case, I thought the lake and the reflection of the sky would be a nice foreground element, but with the water moving so much (the aptly named swift current), it does reduce the reflection quite a bit.

A General Life Update Where I Make Excuses:

So, it’s been more than a little while since I’ve updated… I’ve been focusing more on film photography this summer, so there hasn’t been as much to share. I have a few rolls that I’ve stashed away, that I am hoping to develop and scan myself, but am holding off until I have a few more rolls finished.

I have picked up a few new cameras, which I really should feature in a little “cameraporn” series, so I will try to do that in the next few weeks. It’ll be a Fujica GW690II, and a Mamiya RZ67proII. I am really enjoying the image quality from these larger sized medium format cameras… You’ll see what I mean when I finally get around to posting those pics.

In any case, you’ll likely be seeing a few more updates than you have been getting from me earlier this year, since now I have a bit more time on my hands… Why you ask? (Well, I’ll tell you, even though you didn’t ask.) Well, because a couple weeks ago, the company I was working at laid me off…

At first, I was a little upset, and maybe a little surprised, although I shouldn’t have been. The past year, my company had merged with another, and I had been working to manage the process of several plant closures we had been going through to achieve the “synergy targets” that the board was looking for. It meant I was in the know on some layoffs, even if I had no real control over them or how it happened. But, they layoffs continued with a voluntary separation, and then involuntary layoffs. I made it through those, but then the company made some organizational changes, and decided they didn’t need project manager any longer. It was just strange to be on both sides of the coin there. No major qualms about it though; it’s actually been quite a blessing in disguise! It happened at an opportune time for me, as I had just been trying to finalize my plans for how I could stretch rest of my vacation time this year, only to find out, that I now have plenty of time to vacation!

I’m planning on taking some time to reevaluate what direction I want my career to head in, as well as take some time to explore and learn, and spend time with my loved ones. But enough about me…

And now to get to the point… Oregon Through Timelapse:

You may have seen the photos I posted when I camped in Oregon. I had done a few timelapses, which I compiled with a couple from the last time I was in Oregon to come up with this short video… I hope you like it! I put it together a a couple months ago, so I’m not sure why I’m just now getting around to sharing it! Please let me know if you have any questions or comments about the timelapses. I am never sure how much to bore people with details, and I’m probably a little to lazy to go back and look up anything without being sure people want to know!

Anyways, thanks as always for following, and reading my words and looking at my photos. I do a lot of this stuff for my own personal benefit, but it’s also nice to know that other people enjoy it too!