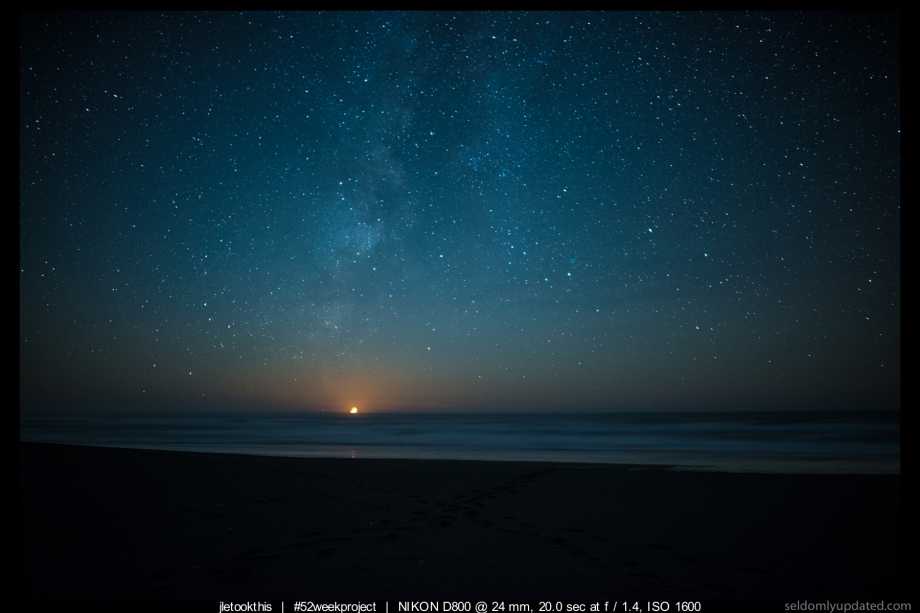 Taken on Tuesday, September 30, 2014, while camping at Gold Bluffs Beach Campground (near Orick, CA, in the Redwoods National Park).

This is one of the frames I took while attempting a timelapse of the milky way over the ocean. Using an iphone app called The Photographer’s Ephemeris, I was able to plan ahead and figure out where and when the moon would be setting. I took a walk down the beach from my campsite to where I had eaten breakfast on a log earlier that day. That spot was key since it gave me a place to hang out while I waited for my timelapse to run, and I thought would be foreground for a few pictures. The key to nice milky way shots is to have really dark and clear skies. Which means, being far away from any city lights or any light pollution, no moon, and low humidity. Fortunately (or unfortunately), the weather was pretty warm, and humid, so the Milky Way was not super bright, but it was definitely there. (Ideally, it’s best when the weather is colder and the atmosphere can’t hold much moisture, but then you have to deal with battery issues, and trying to stay warm, but I digress.)

I’m pretty happy with this photo, but would have liked to have spent more time there, since I only had a few hours to work with. (I was only up until around 2am since the following morning I needed to pack up and leave my campsite before 8am so I could drive 9 hours to Fresno to meet up with my brother and sister.)

Also, here’s a photo of me setting up this photo: