Basically, I’m way behind on this blogging, so I’ll keep things concise, for my sake. 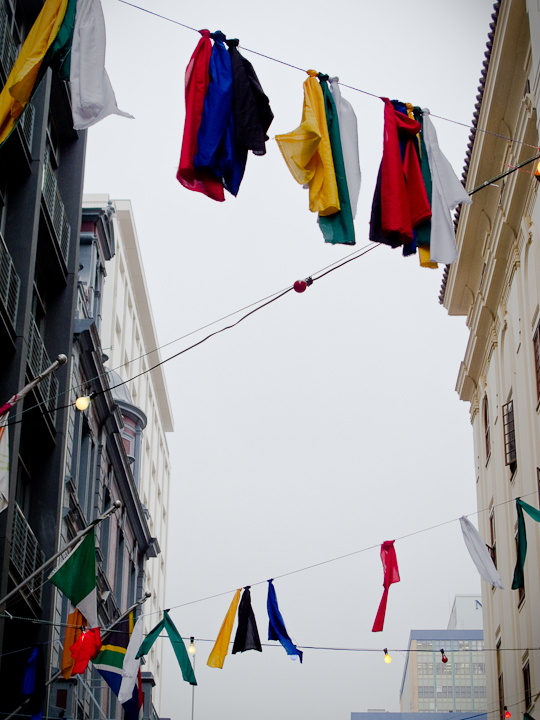 Today was Alex’s last day of her short stay in Cape Town.  She managed to wrangle a couple of tickets to the match in Cape Town that day, so she was able to get the full experience (even if it was the abridged, cliff’s notes version).  This would also be my first World Cup game as well, and only my second ever actual football match (look at me, calling it by what the rest of the world calls it, I’m quite the sophisticated one).  The first being, England vs USA back in 2005 over memorial day in Chicago.  But, that’s not important.  Today’s match was the oh-so impressive Portugal vs. the not quite as impressive North Korea.

We met near the Green Market Square where Alex wanted to check out the wares to pick up some gifts.  It was raining, so we shopped around for some ponchos (and paid a premium for the security of little sheets of plastic with a hole for our faces).  We walked the fanwalk, which was pretty awesome; reminiscent of the march from campus down to the Big House for football games, but obviously, not as busy… The big house’s capacity is still at least 200% of the Cape Town stadium, but nevertheless, it was awesome.

We arrived about 20 minutes early, which definitely wasn’t enough time to get through security.  Unfortunately, security at the stadium wasn’t quite up to snuff, and we ended up getting through security just as the game was starting.  We only missed the first few minutes of the game as we made our way to our seats.  Along the way, we saw mostly Portugal fans, along with some girls holding signs requesting that people give them a ticket and “take them in with them”.  These were young girls, probably no more than 19-20 years old.  I was in disbelief that there were girls this bold to expect people to give them a ticket to a game and expect nothing in return.  A Portugal fan, (obviously drunk), badgered the girl, and kept taking pictures with her as would put his arm around her.  She pushed him away, and renewed her efforts to find somebody to bring her into the game.  As she pushed him away, it seems that he noticed Alex and I watching him.  And, in a case of mistaken nationality, he began a chant for Korea.  It was hilarious, obnoxious, and awkward, and I do what I typically do in those situations, and pretended I didn’t notice.  Alex, on the other hand, piped up.  She was all, “WTF Mate?” and he was all “What?”  She basically called him out for assuming I was Korean, and he pretended his chants were coincidental with him staring at me.  Basically, the main thing I recall from this confrontation was Alex saying, “He’s American, you idiot!”  We continued on our way, and made it to our seats only missing the first few minutes of the game, and none of the excitement.

The reason this game was a notable game was that Portugal defeated North Korea 7-0.  It was an extremely exciting match, even though it was quite lopsided, you couldn’t help but feel bad for the N. Koreans.  There were rumors circulating that the North Koreans had hired Chinese actors to dress up as N. Korean fans/supporters.  What they didn’t realize, was they only had to encourage any people who looked Asian to attend a game, because people will assume they are Korean.

At around the 83 minute mark, with Portugal up 5-0, Alex had to leave the game to catch a flight, and didn’t want to be caught in the mad rush to leave the stadium and not be able to catch a cab, and make her flight.  As we were leaving, we hear cheering from inside the stadium, and we knew Portugal had scored.  We didn’t walk another 100 feet when we heard the crowd erupt in cheers again, and I assumed it was for a replay or something.  Who would have thought they would have scored 2 more goals in the last 7 minutes of the game?  Turns out we missed the last goal, which was scored by Ronaldo on a sweet play which had the ball bounce off of his back, go over his head, and basically land on his foot as he put it in the net.  So yeah, I was at that game.

Alex ended up making it to her flight on time, and the sun had come out after a day of drizzling rain.  As Alex was leaving to make her flight, my buddy Adam was making it down from Jo’burg to visit for a few days. I booked him a bed at the hostel I was staying at, which was the Cape Town Backpackers, and that was awesome.  We grabbed a beer at the hostel’s bar before we headed out for dinner.

We took him to the best burger place in town, Royale, and then headed back to Arnolds to unwind after the long day and catch up.

One thought on “It’s Game Day!”